Been another busy week. We went to our good friends Shaun and Mary last night for a potluck with Don and Mar and our new back door neighbour, as it turns out. It was a great time. Don and Mar took homemade maple ice cream, and an anti-pasto dish with peppers and onions (very yummy both), and I took the date/pecan pie, which went went perfectly with Don's ice cream. Coleen (the new back door neighbour (who knew Shaun and Mary beforehand) took some yummy Brie and blue cheese. A good time was had by all. Shaun and Mary made a great Ceasar salad and a vegetarian lasagne. We all had a great time and we watched some of the Vancouver Oylmpics on TV afterwards.

Speaking of TVs, Brad and I had somewhat of a mid-life crisis last week and we went out an bought a new 42" flat-sceen high def TV with Blue Ray and sound system, a new king size bed (yes we are going to try sleeping together again after all these years!) 2 night stands, a dresser, and the stand for the TV and god knows what else! And that is on top of the new garden door we are we are having put in and the new air-tight fireplace insert that was installed last week! Enh... It's only money and you can't take it with you! It will be extremely nice for me not to have to vacate my (old) bedroom when someone comes to visit, which my sister from Alberta will be doing in a couple of weeks (en route to Saudi Arabia - finally, perhaps - (I'll believe it when I see it!)

In any event, baked salmon and potates for supper tonight (our usual Sunday fare).

And I'll leave you with Lady Gaga at the Brit Awards, which took place earlier this week. Say what you will, I like Gaga. At least she writes most of her own stuff, unlike Madonna, with whom she is being compared.

I can't believe it's already the 16th of February. Seems like days pass now like minutes used to!

Not a whole lot new with us. Brad and his dad had a good ski trip in Maine. It was cold for the first bit, but generally good skiing. They got back last Wednesday, and on Friday, Brad and I hooked up with Shaun at our usual watering hole for an after work tipple. After drinks, we kidnapped Shaun for supper at a nearby restaurant, before heading over to Shaun and Mary's to watch some of the Olympics Opening Ceremony.

By and large, I thought the Opening was great. Measha Bruggergossman, the big-haired gal who sang the Olympic Hymn, gave a terrific performance. We've seen her perform many times as she is from our fair city. And I'm sure we'll see her again in the months and years to come on the classical stages and concert halls around the world.

And k.d. lang - Wow! She just gets better as she ages. Her rendition of Leonard Cohen's Halleujah was inspired. She always does an amazing job with that song - much better than Cohen himself, in my opinion.

Our Saturday was fairly quiet and we both did our usual weekend chores: groceries, laundry, walking dogs, and cooking. I made an unbelievably yummy Medjool date pecan pie, the recipe for which I snagged here. It's very easy to make and is fantastic! The perfect ending for our Valentine's Dinner, which started with smoked salmon and parmesan toasts - the bread, the butter, the salmon and the cheese all combine under the broiler to provide the ultimate taste sensation: crunchy, soft, salty and sweet all at the same time! We then moved on to seared scallops with celery, basmati rice, and homemade guacamole. As I mentioned, we finished the meal with the date pecan pie and a half bottle of Chateau RIEUSSEC Sauternes 2002, which I had picked up in Montreal in November. It, too, was incredibly good ($45/half bottle good!) with strong floral notes and the slightest hint of pine (the tree, not the sol!).

Here are a few pics: 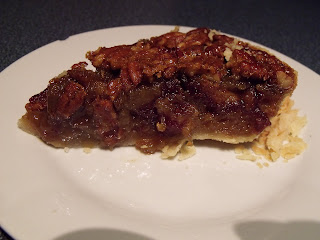 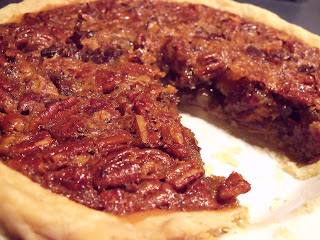 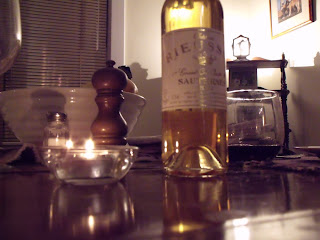 Well, as the title of this post suggests, I have been in a somewhat negative mood of late. Mostly, I think, it's a bad case of the winter doldrums. Though we thankfully haven't had a lot of snow lately, it has been bitterly cold and windy for the last week or so. The low minus 20s C and minus mid-teens C for the most part. Ugh. I've had enough already. And we still have the rest of February and all of March to get in. I really, really, really want to go South somewhere, but as I said before, I think, it's not financially feasible this winter. Next winter, come what may, I am going someplace warm for at least a week in February.

I think it was Jim (over at gorgim - link in the sidebar) who once posted about his dislike of wearing a winter coat. Sorry Jim, but the coat is the least of my dislikes surrounding winter :) For me, it's the winter boots (big, heavy winter boots that one has to wear when one has two dogs that need walking in all kinds of weather), and the long johns that have to be worn almost daily. Not to mention the hats and the gloves. Then there are the slippery sidewalks (or the sandy sidewalks after the city sidewalk plows go over and spread sand, which makes it a lot of fun cleaning off the dogs' paws in the porch after their walks), the slippery streets - caked with snow and ice. The barren, leafless trees. The short days, which thankfully are getting a smidgon longer now. Ugh again!

On top of the cold outside, I've had a bad cold inside. After just nicely getting over the cold I had over the holidays, I picked up a new one that has been hanging around for at least 2 weeks now it seems. Mostly in my sinuses and nose, but I've been coughing a bit as well and just generally feeling miserable and sorry for myself. I think - I hope - I am on the tail end of it. I blame that gall darn H1N1 vaccine I got back in November! It's been years almost since I've had a bad cold, and now this year already I've had two. Oh woe is me! I know. I'll stop bitching now! :)

In other news, Brad and his dad left this morning for a 4-day skiing trip to northern Maine (Saddleback Mountain). They should have a good time and good snow conditions. I'm minding the fort and the dogs. I'm taking Monday off just to give myself a bit of a treat. I'm running down to mom's tomorrow to have a visit and get her stocked up. She's been doing quite well lately, though she too is complaining of the cold. She's on blood thinners, which makes her mind the cold even more, I think.

Our friends George and Barb are currently in Washington, D.C. Ha! They are getting a blizzard there this weekend. They are supposed to be flying back tomorrow, but it remains to be seen if they'll be able to get out as planned. Barb sent me an e-mail this morning saying that the whole city had basically shut down and that they were hunkered down at their hotel with a team of college basketball players. Hmmm... One could imagine worse fates!