Have you heard? It's spring! Though today was beautiful, I prefer the winter we had to the spring that arrived last weekend! It's been cold and damp ever since. And it's supposed to go down to minus 13 C on the weekend! Jeez Louise! Enough already!

Our poor little rhubarb sprouts will catch a cold!

Hey gang. Not much new on this end, though I did receive my token for my computer yesterday that will facilitate my working from home!! Looks like it's actually going to happen! I know, I can hardly believe it myself! I have to keep pinching myself, but hopefully by this time next month, I will log on and connect to my work from home. Brad is estatic also! ;)

Other than that, we are still looking forward to our trip to NYC next month. And can you believe it!! Dame Edna has a new show on Broadway that we will definitely take in! Possums, I tell you! What luck!

Do you know Bettye? If not, please allow me to introduce you to her:

Somebody pick up my pieces...

This cute little video has been making its way around the blogosphere in the last few days. Perhaps you've already seen it. If not, here it is:

Hey! Long time no see! It has certainly been a while since my last post! Hope you all have been keeping well!

Let's see... We watched a lot of the Olympics on our new TV. Shaun and Mary came over last Sunday for dinner and to watch the Gold Medal hockey game between Canada and the U.S. (We won - YAY!). And it was also Shaun's birthday, so we celebrated that as well. Our Paulie and Ron were over the night before that and we had a ridiculously good time with them, too. Georges and Barb came by last night for supper (pasta putanessca & raspberry pie) and a movie (Katyn, a Polish film about the massacre of some 12,000 Polish officers by the Russians in WWII). George is Polish and understood the film for the most part without having to rely on the subtitles.

Went down to see mom today and forgot to take her a piece of raspberry pie! I'm in her bad books now ;) She looked well and was feeling okay. My sister-in-law and niece dropped by shortly after I left apparantly and she had a good visit with them. I also found out today that I am a great uncle once again. My sister's daughter had a baby boy yesterday. Called him Abraham, can you imagine! Jersey. (We had a Minah bird called Abe when I was a kid, something dad brought home one day and thought we would like. (He, of course, had nothig to do with the cleaning of the cage or other bird maintenance - my mother could have shot him!). In any case, Abe learn how to cough exactly like my father, you would swear that he was in the house to hear this bird, and its other favourite lines were, "Going swimmin'" and "I wanna get out" - I taught him that of course!)

What else... We're still waiting on the delivery of our bed and bedroom set (they are making the mattress special order - so we can get it up to our 3rd floor where the master bedrom is). The snow is melting like crazy - another week of this weather and there will be none left (YAY!!). There are plants actually sprouting in our back yard, if you can believe it! This time last year, we had about 6 feet of snow on the ground if not more. I'm really digging being able to wear shoes while walking Kaiser in the morning and on my trek back and forth to work. I HATE winter boots!

We're also looking forward to another trip to the Big Apple. We're going on April 15, so just over a month now. We're going with an old friend (a female university professor from France originally) and have rented an apartment for the 4 nights near SoHo. I've been researching restaurants like mad on the Internet, and I already know that we'll be going back to one of the places we went to last year, Aroma on 4th Street - such a great place! Feel free to give some recommendations!

A few quick pics before I resubmerge: 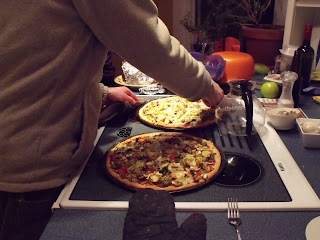 Sid the Kid! (And yes it's me who has his stick and gloves!) 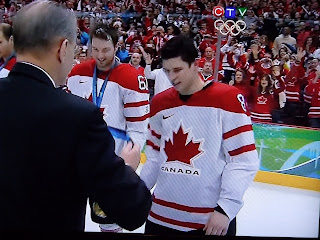 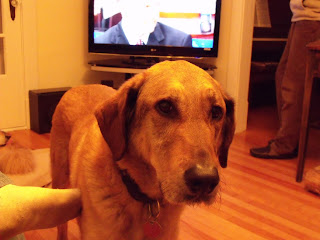 Team Canada goalie on the left, Luongo or something, he's very cute! 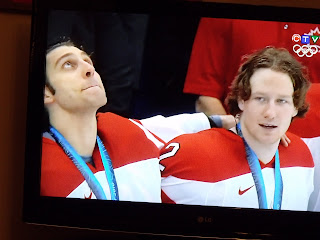 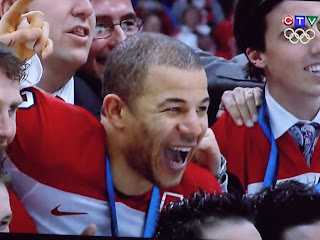