Hey all - er... well, anyone who still clicks onto this blog occasionally! Just wanted to wish you all a very Merry Christmas and a happy holiday season. This has been a crazy busy month with all the parties and gatherings. And I've spent the last few days buying things for my mother to give to people. My sister from Saudia Arabia was here for a few days last week. She had been taking the Cambridge English Second Language course in Halifax for the last month so she can teacj English when she goes back to the Kingdom. She had a good visit with mom and with me and Brad. She's now in Alberta for Christmas with all 3 of her sons.

Outside, it looks more like October than December. We've has so much rain lately that there isn't a flake of snow left on the ground. But we're supposed to get snow on Sunday and Monday, so it will probably be looking like December again just in time for January.

Brad and I aren't exchanging gifts this year. Instead, we're splurging on a 10-day holiday in February in Miami and Key West! Can't wait for that! Brad hasn't been south in ages, but he's agreed to go this time, since I have agreed to stay put and keep the home fires buring while he takes a 3-month leave of absence from his job next May to hike part of the Appalachian Trail! Can you imagine! He will come home after about six weeks or so for a conjugal visit, and I will go to the States and meet him some time after that for a few days. It's something he's always wanted to do and this looks like a good time to do it! I'll keep you posted!

The other big thing that has happened in our lives is that I have FINALLY started working from home!! I started on December 6 in fact. It has been absolutely wonderful! Brad works at home as well (for the last 14 years in fact!), but we each of our own office and so far, so good! We're not annoying each other too much at all! Officially, for me, it's a 6-month pilot project, but I don't anticipate going back to the office full-time ever again. I may have to go in for a few weeks or a month or so when other supervisors are away on vacation, but basically from now on, I'll be working from home. I haven't really gotten into a routine yet, because every lunchtime I've had to go out and run Christmas errands, but I generally get at least an hours more sleep every day and I sure do not miss the bus ride to and from work.

I'll leave you with a pic of new new workspace. Merry Christmas from our house to yours! 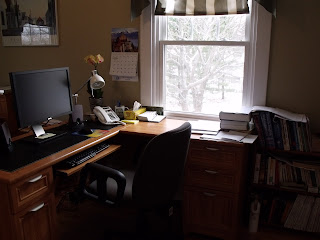