Too cute not to post! More later on the goings on!

Hey all! Just a quick post to keep you updated... Not a whole lot going on in this neck of the woods. It's been a week since Brad left again to get back to his hike and, of course, I am missing him. He's reconnected with his trail buddy, Jedi, and they are blazing through the woods lickey-split! They did 27 miles yesterday! In the rain! Yesh. Better him than me, I say.

I got up early this morning - shortly after 6:00 a.m. - and went to the weekly farmers' market. Got 2 quarts of fresh local strawberries, 4 bunches of basil (yuo know what that's for!), a half pound of Italian parmesan, beet greens, and organic lettuce.

I then came back and checked my lotto tickets (no luck, unfortunately, tho I did win $250 on Thursday!). Then I walked Jasper in the rain and came home and had breakfast. After that, I picked my new numbers, got groceries, and bought dog food for Jasper. Today, too, I actually went for a swim at lunchtime and could tell that it had been too long since I had been there - way out of shape! Something I hope to change this month - Sis, if you are reading this, bring your walking shoes!

This afternoon, I cleaned the house a bit and made a strawberry/rhubarb pie. To me there is no sweeter smell of summer than strawberries and rhubarb macerating in the bowl before I put them into the the pie crust. And I am torn as to which pie I like the best - raspberry or strawberry/rhubarb... Regardless, the pie came out great and perhaps my sister can be the judge when she arrives here next week! If there is any left, that is!

Till next time here are a few more random pics that Brad took of his hike on the Appalachian Trail: 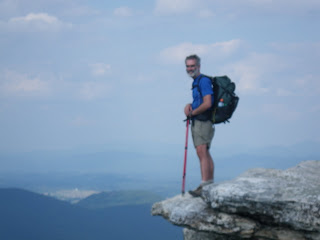 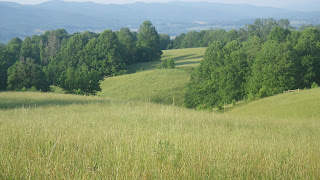 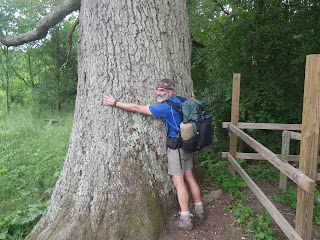 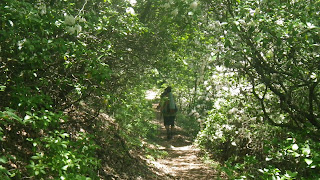 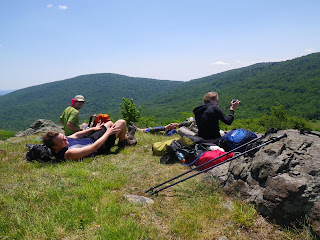 Hey guys! So finally a quick post about Brad's visit home and some pics from his travels on the Appalachian Trail! It's hard to believe that it was a week ago yesterday that I picked him up at the airport. His flight was right on time, and we were soon on our way back home. I have to admit that it was really strange to see him after all the time that had elapsed since he'd left. Of course, his beard and hair had grown and he had definitely lost weight and put on muscle (whereas I have gained a few extra pounds during his absence!), but just his being away for so long made us both a little nervous and apprehensive and there was definitely a little "let's get reacquainted" stuff going on. Certainly to be expected, I think, especially since he was doing something so vastly different from his regular life - and I had been here slaving away at work, looking after Jasper and the house, and doing the things that I normally do.

In any case, it really didn't take us all that long to reconnect. I poured him a glass of good wine and listened to his stories as I cooked supper - pasta putanessca with parmesan/basil oil/tomato powder toasts and raspberry pie for dessert! I think he was happy. (I also made him some garlic-free pesto, which we enjoyed as part of a potluck at Don and Marlene's place on Friday night along with freshly caught trout from their pond!). So we talked and ate and drank and had a great evening together.

I worked the next two days while Brad slept in and ate (and ate and ate). He went out to his dad's for dinner one night and then we also had a get together at Shaun and Mary's with George and Barb and Don in attendance. Great pizza, guys! As always! I took a bit of leftover raspbery pie for dessert and then we were off to yet another social gathering, this time with a few neighbours. I had made another raspberry pie for that affair.

The next day, we went out to Don and Mar's and had a great afternoon and dinner with them at their lovely countryside retreat. We were tempted to stay the night - and polish off a few more bottles from their cellar - but duty called and we had a lot to get done the next day before Brad left yet again.

On Saturday, Brad mailed off the last of his food drops to the U.S., took out his suitcase of good clothes (for the wedding next month) to his dad's (who is driving to Ontario), and packed his stuff once again to head back to the A.T. We had an early supper of baked salmon, beet greens, potatoes, olives, and tomatoes on the deck (with more raspberry pie for dessert!) before I drove him to the bus stop where he caught a bus to Moncton. He was flying out of there the next morning at 6:00 a.m., so that was the easiest option. He texted me later that the guy at the bus ticket office asked him if he wanted the adult or senior's rate! (That grey beard has to go!!) :) Once in Moncton, he went out to a movie and then walked to the airport! I couldn't believe it when he told me that, but I guess that's what he's been doing for the last month and half! He's actually walked farther than it is from here to Ottawa! And many more miles to go!

That said, it's a month from today that we attend his neice's wedding and then spend a week of vacation together in Ontario. We're going to visit Shaun and Mary at their cottage north of Toronto and hopefully have time to visit a few other friends along the way!

In other news, my sister from Saudi Arabia is coming back home on Saturday, so she will be spending some time here in the next few weeks. Will eb good to see her and we'll finally get around to sorthing through mom's stuff, which I brough back here in Apirl.

Phew, my hands are tired from typing... Here's some pics:

Day one - Arrival in Georgia! 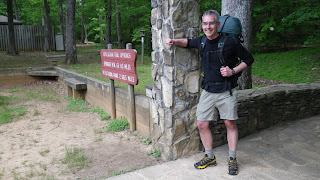 Brad's home for the past 2 months! 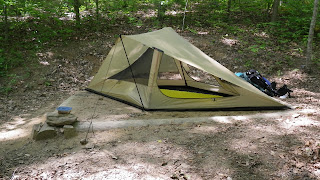 A dude (Water Boy) he's been hiking with for a few weeks - they sometimes charge into a town and gobble down food - and man, is THAT a LOT of food! 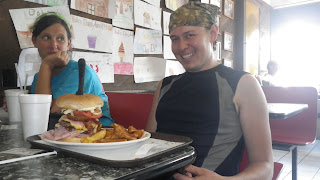 Water Boy, Jedi, Chef, and ... I'm not sure... (Everyone takes on a Trail Name, which I think I have mentioned before) 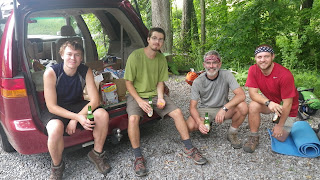 Sometimes they play in streams! 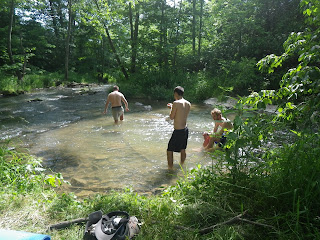 Then it's back to the Trail 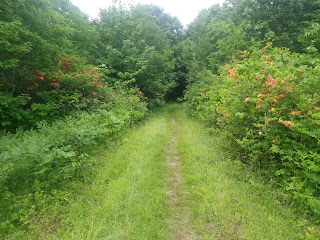 Chef and Jedi, Brad's most constant fellow hiker. Apparently they often get asked if they are father and son! 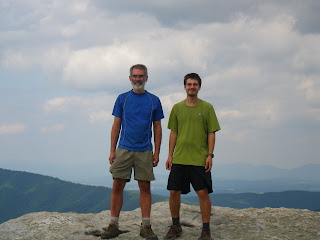 This too, doesn't have a whole lot to do with current events - just a tune I like. But I must say that I defnitely got a bounce out of Brad's visit and can still feel his Halo. Again, more on that later. For now, I'll just let the tunes speak for themselves

One of my fave tunes by Julie Cruise. Theme song from Twin Peaks.

Will post more about Brad's visit soon - and no- this song has nothing to do with that... We had a great time together, albeit too short. Nevertheless, I'll meet him in Ontario in early August.