Hey guys! Sorry for my looooog absence from the blogosphere! Summer happened, I guess! In short - very short - my sister who's living in Saudia Arabia came for about 10 days in July and we had a great time together. She got up every morning an went to Curves religiously! And I must say that, unlike me, she has lost quite a bit of weight.

The last month or so of Brad's hike for me was easier and harder at the same time, if that is possible. I knew it would be just a matter of weeks until we were back together (in Ontario), but I was also a bit apprenhesive about his return to civilization. I knew it would be difficult for him to get off the Trail and be thrust back into my arms and the arms of his family at his neice's wedding in Niagara Falls. In any case, everything worked out (as I knew it would). He met he at Hamilton airport on August 5 (full beard in tow), and over the course of the next week, we gradually reconnected with each other and with other friends and family.

We had a great week in Ontario actually. The wedding and reception went well, we met up with old friends (Javier and Terry) in Toronto, where they treated us to a great dinner at Marinella in TO's Little Italy. Do drop by if you are ever in the neighbourhood. Very tasty and authentic Italian food.

We spent the next day wandering around Toronto and taking in the sights. It was a hot and sunny 30 degrees Celcius. We ended up at a resto/bar (Milestone, I think) close to Dundas Square, where we had a couple of drinks and cooled our heels in the hot afternoon sun. We had another great meal at an Italian trattoria in Yorkville (Dimmi), and then went to a film (Another Earth, I think the name was - a good flick), and then returned to our harbour-front hotel for the evening.
Next day, we headed north to the family cottage of our good friends Shaun and Mary. To say that it poured on the way would be an understatement! I don't think I have ever seen it rain so hard in my life! I was actually scared that we would drive into a tornado! (What!? Stranger things have happend!) No matter, on we pushed, and we eventually drove out of the rain and connected with Shaun and Mary, who led us into the winding road to their cottage. We spent 3 great days there and then returned to Niagara Falls, where we spent 2 nights with Brad's sister and brother-in-law.

Now we're back. I worked last week. (Like a dog.) Brad starts back to work tomorrow. Let me just say that it will be very painful for him!

Here's a few random pics from the A.T. and from our trip to Ontario. I promise I will post more pics and fill in the details later this week! Stay tuned!

Clouds over the Appalachian Trail 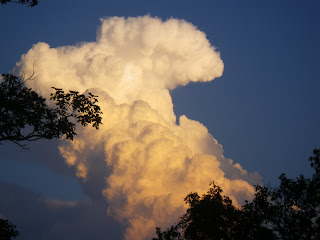 Brad and Jeremy (aka Jedi) near the end of Brad's hike - dig the beard, eh! 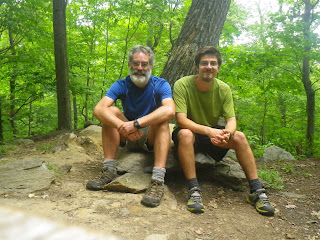 The view onto the lake from Shaun and Mary's cottage 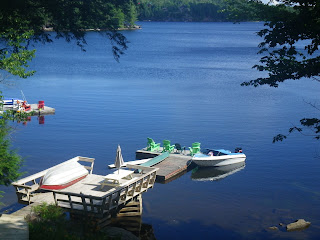 Mary driving the boat on a Bahama Momma booze cruise! 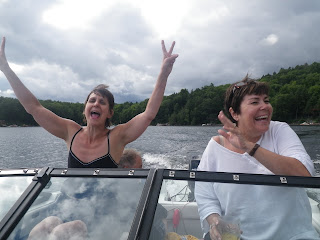 Dinner is served at the cottage! 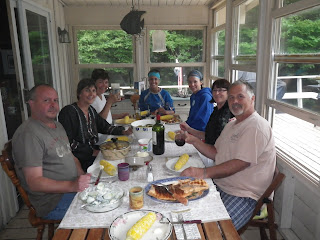