In other news, it is yet another cold (10 C) rainy Saturday here in Eastern Canada. This is really turning into the summer that wasn't. A couple of nice days here and there, followed by cool, rainy or overcast days. I'm actually going to turn the heat on in a few minutes! Enough already!

Brad gets back on Tuesday (YAY!), and it looks like he'll be bringing the warm weather with him - at least for a day - it's supposed to be 29 C and SUNNY on Tuesday! (YAY again!). It will be great to see him and to reconnect (oh yeah!) for a brief 4 days. He heads back to the Trail on July 2nd. After that, I'll meet him in Ontario on August 5 for his neice's wedding, following which we're taking a week of vacation together visiting other friends in Ontario before heading home and BOTH of us going back to work.

On the menu for next week? (Well the stuff I can tell you about anyway!): Lemon squares, raspberry pie, strawberry rhubarb pie, pasta putanesca, garlic-free pesto (!), and all kinds of other yummy things...

Nice - it's thundering now and the rain is coming down in sheets... I'm signing off, turning up the heat, and having a nap! After which, I really have to clean the house!
Posted by Jeff at 1:08 PM 1 comment:

Interesting segment from CNN today. Kyra Phillips interviews former NY Giants dude about same sex marriage, which is being hotly debated in New York State at present. Props to Phillips for calling him out on several points! Of course, same sex marriage has been legal in Canada for over 6 years and in other countries for longer than that. Somehow, I don't see the mayhem on the streets or in society in general that David Tyree is pointing to.

Is it hot where you be? If so, you gotta stay cool. But be careful out there!

The Legacy of Brendan Burke 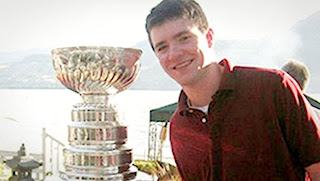 Hey all. I caught a GREAT episode of The Fifth Estate last night. It's a documentary-style news program produced by CBC. It was on the short life of Brendan Burke (son of Toronto Maple Leafs President and General Manager). Brendan was killed in a car accident at the age of 21. He was very involved in hockey and he was gay. The show originaly aired last November and it is exceedingly well done. I urge all of you to watch it. You can access the full episode here.
Posted by Jeff at 12:06 PM No comments:

Hey all. Just a quick update to keep you posted, as it were. All goes well here on the home front. It will soon be a month now that I have been a bachelor! Brad left on his hiking trip on May 9. I've hired a company to look after the lawnmowing. We have a large backyard and I simply wasn't up to the task of mowing it all with our punny reel mower! The company is run by the son of a colleague - they just started up - and I wanted to throw a little business his way. After working all day, walking Jasper, and doing all the other chores around the house, I decided I just didn't have the time or the energy to look after the grass.

I met the usual gang for drinks after work last night and then had dinner with good friends Paul and Ron. It's always good to spend time with them and we had a good meal and a great catch up. Tonight, I'm also going over to friends for dinner - no rest for the wicked!

I gave Jasper a good long walk this morning (though nothing like the ones he gets with Brad!), and then rolled some coin to take to the bank in exchange for coloured paper. I rolled up $50 worth in dimes in practically no time. I have a HUGE amount of coins laying arouhd the house in various containers. The dime one was overflowing, so I tackled it first. I probably still have another $30 in the jar unrolled. Next comes nickles and then pennies - and more pennies, and more pennies! I probably have over $100 just in pennies. I also took a couple of posters to a local framing shop to have framed. That's another thing I've been meaning to do for a while now. Then I went to buy my luck lotto tickets and have a hair cut, something else I've needed for a while! Tomorrow, it's time to tie up my raspberries in my backyard patch. I may have to call on the assistance of a knowledgeable neighbour to accomplish that task properly! ;-)

Brad phones every 2 or 3 days and texts in between. He's been having a great time and has hooked up with two or three other hikers, so they are sort of hiking as a group now. His weather has been better than here, but he, too, has had some cool rainy days. One night last weekend they spent in a lodge and went tubing down a river the next day. (You can't hike all the time, apparently!) He finally has a Trail Name (everyone hiking the Appalachian Trail takes on a "trail name".) He had one before he left, but it didn't stick. He is now known as Chef-boy-r-dee! Which I think is because the other hikers are jealous of the meals that he makes with his own dehydrated food - he dehydrated stuff for months in preparation for the trip - took some with him, and I am mailing the rest at designated drop sites. I've really started to miss him, especially on Sunday nights when we always have baked salmon and usually baked potato and other vegetables followed by dessert. Most times, we watch a movie or something else we'd taped the previous week.

In any case, he'll soon be back for his 4-night furlough (he gets back on June 28), so till then, I guess I will just lie back and think of England! (Or something!)

Below is the current desktop background on our computer (I change the backgrounds religiously when I flip a page on the calendar). It was taken in 2004 at a cottage we rented on Prince Edward Island. That was Samson's last vacation with us. He died a few weeks after we returned. He's the golden retriver with the wite face. And Kaiser, too, we lost at the end of last August. So I'm missing all my boys at present! But Jasper and I wil keep the home fires burning and look forward to June 28!

Be well, my friends! 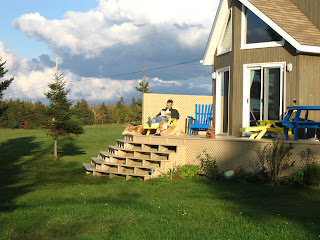