Has it been a week already since my last post? Jeez. Ca passe vite!

It's been a rather uneventful week with the exception being that last Monday I learned that I might be able to start working from home come March! OMG! Needless to say I am thrilled, and Brad is doing his best to be act like he's happy for me! Haha.. He has been working from home for many years and has grown quite used to having our place all to himself during the daytime. Oh well. I'm sure we'll manage somehow! I live for the day when I no longer have to take the bus to the opposite end of the city and work with many of the morons that I do. Speed the day, I say!

It was VERY cold here this morning - around minus 18 C, but it has been warming up all day and we're supposed to get rain tomorrow and Tuesday. Ugh. I HATE rain in the wintertime.

Got down to see mom for a while this morning. She looks good and has no major complaints. Long may it last!

After I got back from mom's I made an Indonesian Peanut Soup and the lentil salad with sun-dried tomatoes and feta. Brad made Shaun's special spinach salad to take out to his father's tonight for a good-bye party for one of his neices who is going back out West. I am actually starting to feel like crap (sore throat and stuffed up sinuses), so I am sitting this one out.

Here's the recipe for the Indonesian Peanut Soup:

In a large saucepan, heat the oil. Add the onion, garlic, jalapeno(s), ginger, and lemon grass and sautée for 4 minutes. Add the water and bring to a simmer. Cook for 12 - 15 minutes over medium-low heat, stirring occasionally. Reduce the heat and add the coconut milk, peanut butter, ketjap manis, lime juice, and dried seasonings and cook for 5 to 10 minutes more over low heat, stirring frequently. Stir in the cilantro. Yeild: 6 to 8 servings.

** I use chopped zested lemon peel, as good fresh lemon grass is hard to come by here. Works great!

Phew! Sunday evening already! The weekend literally flew by. Started off with drinks with Don and Mar at a nearby hotel, as there was a gas leak at our usual haunt. Was good to catch up with them as I had not seen then since New Year's Eve. Brad was at his dad's and Shaun and Mary couldn't make it. Georges and Barbeara are doing their yearly purge, i.e., no drinking in January, so I didn't even try to contact them... (Let me know if your off the wagon, dudes, and we'll fit something in next week!!)

It's been basically a slow weekend with nothing much on the go. I went swimming both last night and tonight, which felt great! I'm definitely in the mood to drop some unwanted pounds and get in better shape. Tomorrow, I'll bike and then swim again on Tuesday. I have to get in shape for NYC in April!

We had our usual baked salmon, baked potato, and veggies for supper tonight. But I also made my Thai tofu and zucchini curry this afternoon as well as a large batch of rice. Yesterday Brad made homemade beans and a bean salad. So we should hopefully have little cooking to do this coming week both for lunches and suppers.

We continue to be horrified by the situation in Haiti. If you haven't already made a donation, please do so. I made an initial donation to Doctors Without Borders on Friday and will probably end up giving more. We have so much here and take so much for granted, the situation in Haiti is humbling. There but for the grace of god go we all....

Have a good week amigos!

Here's some eye candy and incentive! 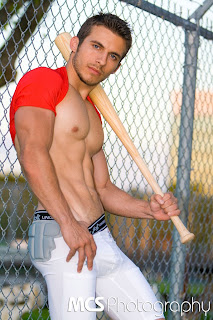 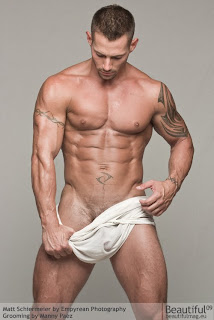 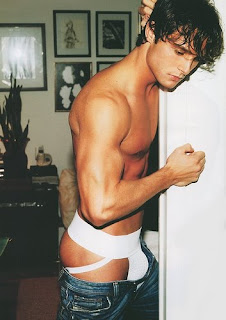 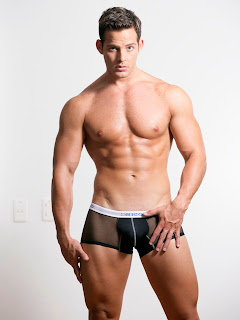 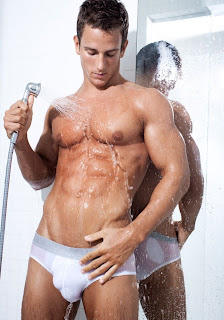 Just a quick post to express our sadness and horror at the incomprehensible destruction and chaos in the wake of the Haitian earthquake. The magnitude of the devastation is truly overwhelming.

Brad knows one of the Canadians still listed as missing. Though they had never met in person, they had frequent work-related telephone and e-mail conversations. He had sent Brad some pics of Haiti and the work he was doing there. He had been home for the holidays and had just returned to the island nation on Tuesday, the day of the quake. We hope he is still alive and our thoughts and prayers are with him, his family and with all those suffering in Haiti.

Please send what you can to the Red Cross, Doctors Without Borders, or other worthwhile NGOs that are providing relief to quake victims.

UPDATE: Very, very sadly, we have learned that Brad's colleague was one of the casualties of the Haitian earthquake. By all accounts, he was a terrific guy - devoted husband and father of 2. Our hearts go out to his family and friends.
Posted by Jeff at 8:33 AM 1 comment:

Sunday cookin' with Jeff and Brad

Hey guys! Wassup? Been a busy Sunday here in eastern Canada. I did stay in bed though until almost 9:00 a.m., which was very nice. After walking Kaiser and feeding both dogs, I gobbled down my half grapefruit for breakfast, checked my losing lotto tickets - twice! - just to make sure, and gathered mom's stuff together and headed down to her place. It was bright and sunny here today, but very cold, minus 15 C and windy. Brrr.

When I arrived at mom's she was feeling a bit under the weather, but she looked fine. I later came to find out that she had misunderstood the gal who had taken her blood pressure earlier in the day... Mom thought she had heard 123 on the bottom (systolic, diastolic, I'm not sure which the bottom No. is). In any case, no. The gal later told us that it was 123 over 90something, which is really good, especially for my mother.

I pursuaded her to go out and have some lunch even though she didn't want to. They had chicken noodle soup, most of which mom ate, but later complained that the chicken must have died of old age, it was so tough. Jersey... She's a hard old gal to please! The place was absolutely beautiful there today with the bright blue sky and frozen lake. I keep telling mom and her fellow geriatric inmates that one day soon, they will have to don their skates and rip some lines on the lake! They nod and smile, as if I'm the one who's out of his mind.

After a little somethin somethin this afternoon, I finally got a chance to make a new soup that I've been wanting to cook for a while now. It's a tomato and Israeli couscous potage, which, as it turns out, is really is delicious. Here's the recipe and a pic:

In a large sauce pan, simply stir fry the onion and carrots until softened (about 10 minutes).

Add the spices, half the garlic, tomatoes, vegetable stock/broth, and couscous.

Bring to a boil, add the remaining chopped garlic, reduce heat, and simmer for about 10 mintues. Throw in the chopped cilantro and let sit for at least 10 minutes. Ladle into bowls and serve. Serves 6 to 8 easily.

Yum! Here's a pic of the finished product: 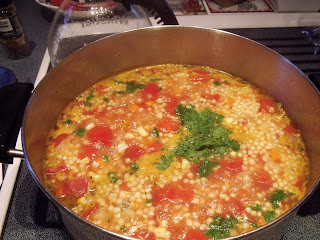 First off, Happy New Year everyone! Hope you all had a great holiday and that 2010 is treating you well thus far! My cold hung around the whole time I was off, but I still managed to have a good time and the break from work was needed and enjoyed. We hosted a New Year's Eve party for some friends and neighbours and it was very festive with the Christmas tree still up and a fire roaring in the fireplace.

Now it's back to the grind and the rest of winter. I think the US and Europe are actually having a harder time of it than we are here in Canada. It's been almost springlike here for the past few days with temperatures hovering aruond the freezing mark and no snow or rain for over a week. There's still a lot of snow on the ground, though, and we'll no doubt get a lot more before the winter's over.

I'm really wishing I was in Saint Lucia or some other warm place, but with the painting of the house, replacement of the runner on the stairs, and other expenses, I don't think a trip South is in the cards for this year, anyway. Unless, of course, I have a big lotto win! Tonight's Lotto Max jackpot is $40 million, so wish me luck!

Speaking of winter, the Olympics will be getting underway next month in Vancouver. For the first time ever, I believe, there will be a Pride House in the Olympic Village - a place for gay and gay-friendly atheletes and fans to get together and socialize. I think it's a great idea and I hope it's a success. One of the centerpieces at Pride House will be a sculpture of a naked hockey player called, appropriately enough, Slapshotolus! Word on the street is that a Montreal Habs player posed for the work - I'm joking, of course, but it certainly is a provocative piece that's bound to cause a bit of a stir. And you have to admit that hockey ratings would probably go through the roof if players were similarly attired! They'd likely have to institue some new rules about high-sticking and being off-side! And instead of power plays, there could be power bottoms - Oh, the possibilities are endless!

All of the pics I've seen have been a version of the one below, so no word yet on whether he's cut or uncut! Without further ado, then, I give you Slapshotolus! 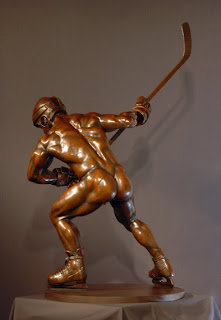