Mario Lopez on Ellen - in his drawers! Wow! Gotta get me a pair of those!

Amazing video of an airbus flying in and around Rio! Go to whole screen if you can!

He's our new dog! We brought him home from the local SPCA on Christmas Eve! (He's the black and tan dog in the foreground.) He's basically settling in fine, though he definitely has some separation anxiety, i.e., when Brad and I both go out. On Christmas Eve, we put him in the crate we've had for a long time (got it with Samson 20 years ago), and he seemed fine when we got home. On Christmas day, however, we put him in the crate again when we went to Brad's sister's place for dinner. When we returned home, 2 dogs greeted us at the door! Oliver had somehow managed to get out of the crate - a feat that Sam, Kaiser, and Jasper never managed to do! We've left him outside the crate since then when we've gone out, with limited success. Usually nothing is out of place, but today 2 bagels were taken from the kitchen counter and devoured (while we were both out). He's a great dog, but definitely one we'll have to keep an eye on! 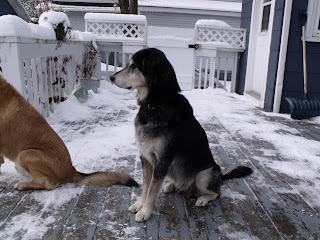