Just a quick post to wish you all a very happy New Year! I can't believe it will be 2013 the day after tomorrow!

2012 was a very busy and eventful year with Brad finishing the Appalachian Trail and me losing and keeping off 32 pounds! If someone had told me a year ago that by the end of 2012 I would be 32 pounds lighter and have put close to 2500 km on the bike, I would have smiled politely and handed them a one-way ticket to the looney bin! But, thankfully, that IS what happened and now I've got South Beach in February (and Spain in May) to look forward to and to use as an incentive to keep biking and and keep the weight off.

Today, too, has been busy. I biked 25.3 km first thing this morning and then plowed through the snow drifts to walk Jasper. Brad had waded through the snow earlier to take Oliver for his constitutional. We had over a foot of snow last night and this morning, making it well over 2 feet of new white stuff in the last 3 days! Thankfully, Brad shovelled out the driveway after each storm, though I did shovel off the back deck. I also made a gingerbread cake for tomorrow night - we're doing our usual NYE party with friends and neighbours. Brad's off right now buying booze for his traditional Swedish Glög! I've also done a pile of dishes and have salmon roasting in the oven, not for supper, but to have next week. Tonight, I'm making a Thai green curry with tofu and zucchini.

As the timer is about to go off for the salmon, I'll cut this short and simply wish each and every one of you who still read this space a very happy and prosperous 2013!

The pic below was taken a few years ago, but it's basically what our backyard looks like right now, minus the sun (it's still cloudy and overcast here) 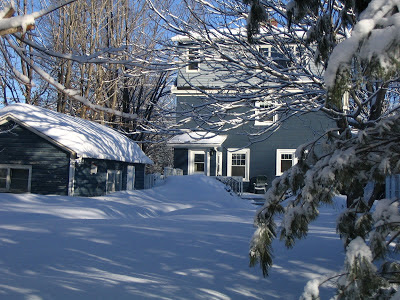 Hey all! Just want to wish everyone a very Merry Christmas! We are doing our usual Christmas rounds - to Brad's dad's last night for a meal and opening of some gifts and then to his sister's this afternoon for the big turkey dinner. It's been very cold here the last few days (highs of only minus 7 C or so and windy). My sister who's living in Saudie Arabia called early this morning (8:30 or so), when I was just getting up. She was brimming with the news that her middle son has finally asked his long time girlfriend to become his wife! That and the fact that her husband has agreed that she can come to Miami with me in February! I'm not sure I sounded overly enthused on the phone as, like I say, I was JUST getting up, had to do the usual morning things (not to put to fine a point on it), was still kind of groggy, and then looked down to see a pile of dog puke on the bedroom floor. Ugh. I can think of better ways to start off Christmas morning! However, I tried to spin it as best I could given the circumstances, as I knew sis was very excited on both counts. It will definitely be fun to her along in South Beach! We'll have a blast! And we are also excited that her son is finally tieing the knot!

That said, not much else is new. I've been doing a lot of Christmas baking - gingerbread cake, pies, and a Danish spice cake, which I've made for a long time now around this time of year. As our good friend Shaun wants the recipe, I'll give it to you all here:

Preheat the oven to 375 F and lightly butter and flour a 9 inch springform pan.
In a large bowl, stir together syrup, sugar, and buttermilk. In a bowl, whisk together flour, spices, baking soda & baking powder. Stir flour mixture into syrup mixture and pour into prepared pan.
Bake cake in middle of oven for 30 minutes. Reduce temperature to 350 F. and bake cake for 45 minutes more, or until it begins to brown and crack. Cool cake in pan on a rack for 10 minutes. Remove cake from pan. Cool cake completely on rack.

For the Filling:
In a bowl with an electric mixer, cream butter and sugar until light and fluffy.

For the glaze:
In a metal bowl set over a pan of barely simmering water melt chocolate with water. Add butter one tablespoon at a time and whisk until well combined.

Gentle remove cake from bottom of pan and transfer to a plate. Using a long serrated knife, halve cake horizontally, putting top half on a sheet of wax paper, cut side up. Spread filling on bottom cut half and spread marmalade on top cut half. Reassemble cake and spread glaze over it, letting excess drip down sides. Chill cake until ready to serve. Serve at room temperatire.

I used red currant jam instead of the marmalade as it contains no citric acid, which Brad can't eat. I also used a whole Green and Black's Maya Gold chocolate bar instead of the chocolate chips. It give a very nice orange flavour. I also added a teaspoon of cardamom with the other spices. 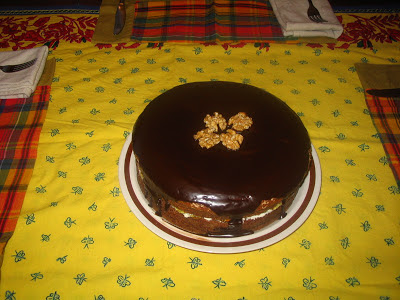 A very yummy wintertime cake. Enjoy! The recipe is from Gourmet Magazine, March 1994.

Is this the end?

Tomorrow - 21-12-2012 - is a significant date in the Mayan calendar. Some say the world is supposed to end. I actually have a bet with our good friend Mary that it will! Craziest bet I ever made! If I win, how does she pay me?

If not, I'd like to meet this dude on the other side! 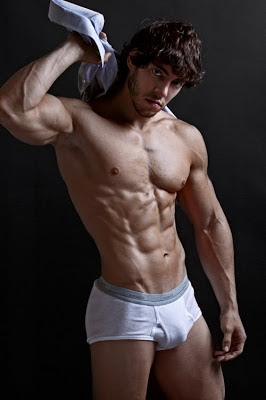 Gangnam Style in the country

I know, I know, but sometimes, just like at an accident scene, you just can't look away!